What you could consider, and it's really good but it sound silly, is to send data with pigeon. Sending a bird with 1TB of data Is totally untraceable. As other answers have pointed out, one important hurdle you need to scale is that data needs to get to your phone.

Current implementations require your phone to let nearby towers know it's there, so that data can get routed to your phone efficiently. However, this is not necessary. You can do broadcasting, ie. If the data is properly encrypted, only yours will be able to understand it.

How do I Get Started with a Burner?

Note that this would only be feasible for a small number of phones, since otherwise you would quickly saturate the entire network, but you did say it was for a few key people. Note that you really, really need to have rock-solid encryption, because every single hacker in the world will also receive the data. And finally, note that yes, you will need to get other companies to accept this broadcast traffic. You can probably get away with an excuse along the lines of: "let's implement this in case of global emergency, we keep the keys so no-one can use this without permission".

So you can receive data, but sending is another problem. Your phone will always be the single source of the transmission.

Now transmissions like these always hop over a number of stations. The best way to go is to ensure you reach a station you control ASAP. Once there you can totally cover your tracks. This means no-one can work their way back to your phone from any station between yours and the final destination. They could find your phone if they start somewhere between your phone and your station, but they'd have to know where to start looking.

This would therefore make actions of these CEOs recorded under the identity of somebody else. We can still Note that even if we would not be able to trace who would be using this feature, and when, it would still be not so hard for a proper hacker to discover a list of phones IDs which are allowed to use this feature There cannot be an "untraceable" mobile phone.

The carrier network must by necessity know where the phone is at all times, otherwise it won't be possible for the network to route calls to the phone If the network doesn't know where the phone is, then when somebody tries to call that phone the network will say that the subscriber is out of the coverage area. If you want your phone to ring it means that you have to let the carrier know where you are. However, if you are willing to relax the requirements a little, you may have better untraceability. The communication device not a "phone" may be able to use available free Wi-Fi networks to establish encrypted communications with a VPN virtual private network server, and use this encrypted channel to connect to other devices; the user may then run some sort of voice-over-IP software, providing much of the functionality of a telephone.

With our current technology, and not working with military, no, you can be traced as long as your phone is on. There might be a way around this, but I have never heard of it, and will make you a very rich person. Maybe wanted as well Transport of the data calling, browsing, mailing etc , the network provider , will know what phone you have and probably where you are, within 50ish meters.

If you use WiFi, you can be located even closer. The data itself can be encrypted , but you will need professionals to do it right. Luckily you are from such a company, so that could work.

To give an idea how hard it is to get what you want: Unknown parts of every mobile phone. Black Phone. Whatsapp Encryption one of your competitors. Hunted TV show. This is already a thing. Either use a crypto phone or encryption here and here. Crypto phones are mobile telephones that provide security against eavesdropping and electronic surveillance. The interception of telecommunications has become a major industry. Most of the world's intelligence agencies and many private organisations intercept telephone communications to obtain military, economic and political information.

The price of simple mobile phone surveillance devices has become so low that many individuals can afford to use them. Crypto phones can protect calls from interception by using algorithms to encrypt the signals.


The phones have a cryptographic chip that handles encryption and decryption. Two algorithms are programmed into the chip: A key-exchange algorithm for the key agreement protocol and a symmetric-key algorithm for voice encryption. Basically this is real-world technology. For a high-level IT company implementing the right sort of phone technology and encryption should be child's play.

It depends if you are willing to differentiate 'untraceable' from 'undetectable', because if you are using GSM or similar the handset will be detected. So, if you want to be able to make a call that cannot be traced, and you are happy enough to use mobile internet eg Skype as the medium of communications, then you can make your calls untraceable by implementing over Tor. UDP tunneling would suffer from latency issues. So don't try video. But audio Skype over Tor is tried and tested.

Using today's technology, that's probably the best option you will get. However, your company is 'like Google', so it should be totally plausible for the company to develop a 'stealth' secure non CALEA derivative of 'Skype' or a less tech. It's not currently within our technological capabilities, but not completely out of the bounds of possibility: how about going quantum? Maybe the company has managed to integrate a mechanism for entangling and modulating the spin on the photons involved in the radio transmission? The combination of the potential for quantum cryptography, along with the steganographic bonus of nobody even thinking of looking there might make it a good candidate. 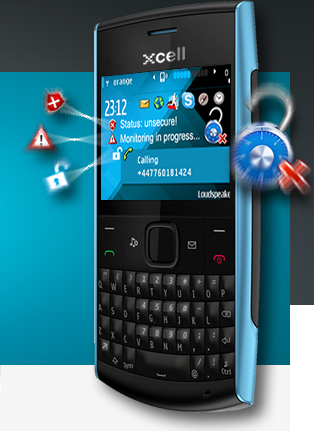 Plus, one of the bonuses of using entanglement and spin is that if someone did look, the person sending the signal would know that the transmission had been intercepted! In order for your phone to be reachable and to use the network, it needs to call in to the nearest cell. It needs to identify itself, so calls and data can be routed. One way to work around this would be to have a very large number of different IDs. Think of an RFA token that generates a new key every 60 seconds. You might do the same with your phone ID basically your phone number.

Now you need your service provider to handle these ID switches, which should be possible, maybe creating a little bit of lag. A caller would dial your regular number, some tech routes the call to the current ID. I think that would make sure your device just became a lot harder to trace.

It would still be possible, if you had access to the algorithm and code for the ID switches. It will also be partially traceable without these for longer phone calls, so long as the device you are communicating with does not use the same technology, because you "only" need to trace who the caller is connected to. And of course if the person or agency that wants to know your current position just calls you, they will be able to trace where this call goes.

Obviously, there is the one thing all of us can do, which is to switch off the device when we don't need it, at the price of not being reachable. Which need not always be a bad thing If the FBI wants your cell phone, they'll subpoena all the major carriers, one will say "Joe Dissident is our customer, he's at Main and Market right now".

That's a big damn problem. However, they'd have no earthly idea what Joe Dissident is browsing or doing, because every device on earth would run a Tor-like protocol which would anonymize everything deeply. OK, so sites already get revenue by placing ads.

What if data providers did too? The website says "Give this ad to the ISP" e. And this is a new protocol that's by design stateless ; it doesn't pass Referer and doesn't allow storage of persistent data. That protocol is intended by the first router WiFi node etc. Which answers that ad request. It knows nothing about Joe or what site he's browsing. But it does know where you are physically. It also knows the time. It's - bet you're getting hungry! Why this huge digression into even more damn ads? Because the ads would pay for bandwidth.

Which means there'd be more WiFi type bandwidth, and it may even pay for cellular data bandwidth, which would allow cell phones to be anonymous. The cell company gives service to any anonymous comer who accepts some ads, and the phone randomizes its ESN whenever it's idle, so nobody can track patterns of use.

So, the data is carried over the existing network, but can't be read because it's encrypted. When you as the CEO call the CFO, your call goes to the VPN servers, then waits a random number of milliseconds there to mask what data is yours, and pops out through another one of their nodes and connects to the CFO's phone, so if they're trying to trace the call from the CFO's side they get stuck at the VPN, and likewise from your side. While it is true that with sufficient control over infrastructure one could potentially match data from your phone going to his by timing, if you're not nearby it's very hard to do, especially if you're in a different country.

Really you should just do your own research. You're getting some good information and some bad information here. As someone who procured and set up satellite phones in the s for civilian use, I can tell you that "like normal cell phones in a bulky case" is EXACTLY what they looked like, in the s.